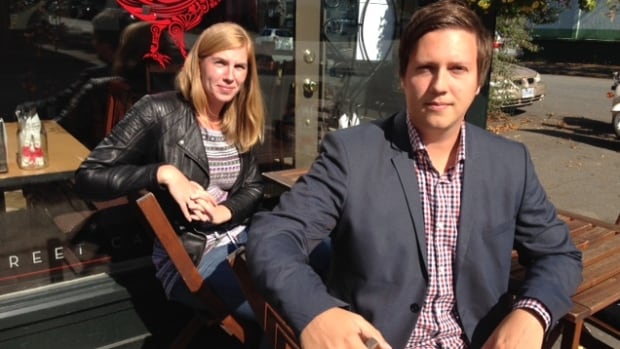 Henrik Karlsson and Emilia Gustafsson hang out at a coffee shop steps away from the East Vancouver townhome they were hoping to buy. (CBC)
8 shares

Salma Nurmohamed
Salma Nurmohamed is a senior producer with CBC News. She has been a reporter and an assignment editor. Currently she is an editor with the digital team.

The scene is pretty standard for what often happens when a quality home in a good neighbourhood hits the market in Vancouver — dozens of house hunters at the open house, offers restricted to a single night, and, in the end, a property that goes well over the asking price after seven bidders fight for the title.Certainly, earlier this year few home hopefuls in Vancouver would have thought this was unusual.Only this scene took place 10 days ago  — late September, and nearly two months after the 15 per cent foreign buyer real estate tax was brought in by the B.C. Liberals in an attempt to cool the market and increase home affordability. 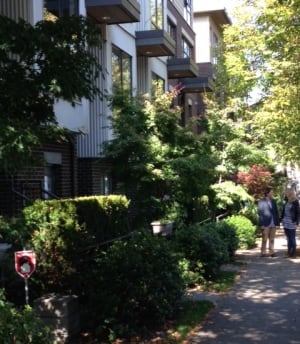 Townhouses and rowhomes in East Vancouver, which are in high demand despite a foreign home buyers tax. (CBC)
"After the long weekend [in September] it went crazy — 30 people in one open," said 33-year-old Henrik Karlsson. "I expected it to be less busy."Karlsson and his wife, 28-year-old Emilia Gustafsson, hoped upgrading from their 631-square-foot one-bedroom and den would be easier with the tax in place.But they lost the bidding war — the two-bed, two-bath, 1150-square-foot townhouse in a pretty pocket of East Vancouver went for $70,000 dollars over the asking price at $908,000.Indications of a seller's marketOfficials with the Greater Vancouver Real Estate Board say the tax, so far, seems to have created two different markets — one for detached homes and one for condos and townhomes.Sales of single family homes are slow and prices soft, but, they say, the attached market is showing a different trend. 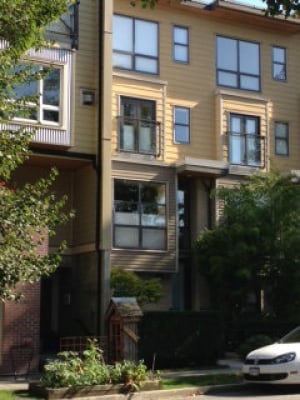 Townhouses on Commercial Street in East Vancouver. Henrik Karlsson and Emilia Gustafsson put in a bid on a townhouse across the street, but lost out in a bidding war. (CBC)
Though the board won't release official October numbers until Tuesday, officials say the indication for the month so far is that the "sales to listings" ratio for townhomes and condos in Vancouver is hovering at 40 per cent. A ratio of 20 per cent or more is considered a "sellers'" market. It's an eyeball roller for Karlsson and Gustafsson, who both work in the film industry, and who say they still can't afford a single family home in the city on their $900,000 budgetThe couple – as they put it – wants to "future proof" their lives for future babies: two bedrooms, some outdoor space, their own street entry, and maybe a room for an office.It's nothing outlandish, but outlandishly tough to find, says Gustaffson.Short supplyNone of this comes as a surprise to Michael Ferreira with the housing research firm Urban Analytics. The tax, he said, may be working at the top end of the market, but that's where it ends.This fall, his firm has counted just 16 new townhomes that will hit the pre-sale market in Vancouver during what is referred to as the busy "fall launch" — when home buyers are back from summer holidays and the market gears up.That's too few, he said, to leave a visible imprint on the market."We're just not doing enough to provide the type of housing that we are now seeing increased demand for," said Ferreira.According to Anne McMullin with the Urban Development Institute, current zoning laws will continue to limit the supply of attached homes and keep competition high. The foreign buyer tax, she said, isn't fixing that."We're having to jam most of our development into 15 per cent of the land base because 85 per cent of the land [in Vancouver] is zoned single family."Added to that is a lengthy permit process and fees that can tack on an additional $150,000 to one unit.McMullin — whose association represents developers — said that means townhouses in Vancouver are not attractive for builders.Give tax timeBut Josh Gordon, an associate SFU professor in public policy, doesn't see increased supply, but a larger curb in demand, as the way forward.His bet is on the 15 per cent foreign buyer tax working — once it seeps through the system and, as he puts it, "mid-range" buyers can move up into single family homes."The point is that you bring the top end down enough so that locals can move up," said Gordon, who has also advocated for a tax on homeowners who don't earn income locally.But for Karlsson and Gustaffson those single family prices would have to fall substantially in order for them to comfortably move up."To me, you can re-zone a lot ... you don't need all of those houses, you can build townhouses and fit five times as many people and they [Vancouverites] won't have a burden on their commute," said Karlsson.They say it's how they grew up in Sweden, where they're originally from, and they don't see the downside.
Thank you for reading. We give insights to help you with your search for Homes in Chilliwack here. If you want to know more about eXp Realty let us know...we would love to share that with you.