The ART of the Back Peddle... 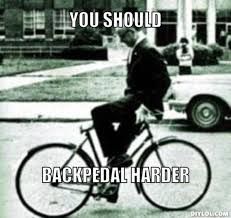 VICTORIA — B.C. is considering refunding the foreign buyer tax to some buyers, says the finance minister.Mike de Jong said Wednesday the refund idea is one of several reforms under his consideration as part of changes to the six-month-old 15 per cent foreign buyer tax on real estate sales in Metro Vancouver. It comes after Premier Christy Clark announced last week exemptions for foreigners with work permits, as part of B.C.’s response to immigration orders by U.S. President Donald Trump. The rebate under consideration appears to apply to those people who paid the new foreign buyer property transfer tax on a home, but then shortly afterwards obtained Canadian citizenship or permanent resident status that would have originally exempted them from that tax.“It’s one of the things that has been presented that we’re looking at, in terms of someone who has made a purchase and then in a very short period of time meets the criteria and acquires the status whereby they wouldn’t have had to pay the tax,” de Jong said in an interview Wednesday.“We do this with things like the first time buyers exemption around residency and that sort of thing,” he added.B.C.’s first time home buyers’ program gives a tax break to certain Canadian citizens and permanent residents, but it also allows people who become citizens or residents within 12 months of the purchase to apply for a rebate on savings they’d missed.De Jong said he’s considering other ways to make the tax fairer, as government analyzes the impact of its abrupt August 2016 implementation. The tax was supposed to cool an overheated housing market in the Lower Mainland, but caught many by surprise because it came from a government that had been reluctant to pin any blame on wealthy foreign buyers.“It was an example of policy shock,” admitted de Jong. “And so, in the aftermath, people have raised certain specific circumstances. That analysis is ongoing.”The tax’s fundamentals — such as its rate and focus on the Lower Mainland — aren’t yet up for debate.“There’s not going to be change in the rate and I rather suspect there will not be a change at this point in the applicable geography,” said de Jong, dismissing calls to expand the tax to southern Vancouver Island and the Okanagan.NDP critic David Eby said government’s consideration of rebates is the least it could do for people who lost their deposits, and in some cases their entire real estate deal, because of the sudden impact of the foreign buyer tax.“It was devastating for them,” said Eby. “At a minimum, the government should be moving quickly to fix this problem but they should have recognized this was a problem in the first place.”Eby and the Opposition NDP proposed the foreign buyer tax exemption for people with work permits last year, but the idea was dismissed by de Jong and the governing Liberals.rshaw@postmedia.comtwitter.com/robshaw_vansun
Thank you for reading. We give insights to help you with your search for Homes in Chilliwack here. If you want to know more about eXp Realty let us know...we would love to share that with you.